Aitutaki was heaven on earth for passengers from a cathedral in the sky.

Flying 33,000 feet above sea level, as is normal these days, it’s a bit hard to spot sharks, especially when cloud covers the Pacific Ocean far below.

Imagine flying at less than 7,000 feet, for hours on end, wave tops thrillingly close underneath, beams of glowing sunlight lancing down from the heavens through gaps in the clouds overhead.

“Flying over the boundless blue Pacific in the 1950s still had a touch of daring, swashbuckling allure, especially when you were low enough to see the sharks,” says enthusiast Stewart Haynes. “Pilots were demigods in RayBans. Hostesses were angels in nifty uniforms,” he says.

TEAL being Tasman Empire Airways Limited, was the forerunner to Air New Zealand and a trademark from a colonial era which focused towards Australia and the northern hemisphere, rather than islands in the south. Back then, bemused passengers were advised to bring a change for swimming, unusual advice even then.

TEAL themery can still be found at the Flying Boat Beach Bar & Grill at the Aitutaki Lagoon Resort & Spa and at the TEAL Lodge located on the old flying boat islet of Akaiami. “The lodge has been rebuilt on the exact spot where the original terminal stood,” says lodge host Tearuru Carl Marsters.

“Here the well-to-do of the fifties, including movie stars John Wayne, Cary Grant and the like, stopped for a few hours, or even overnight, while the planes were serviced or waiting for weather to clear.”

Bare backed labourers wrestled 44 gallon drums down a stone jetty, remnants of which were rebuilt by the lodge and can still be seen today. Passengers would swim in warm lagoon waters around the grandly named terminal building, shower outdoors under the coconut palms and eat lunches of crisply cut sandwiches and fresh tropical fruit. In other words, passengers on TEAL’s Short Solent flying boats had a front row pew in the cathedral of nature — filled with celestial glories and earthly delights.

“The Solent ambled along un-pressurised at about 220 knots – 400 kilometres per hour,” says Haynes. “Human fascination for flight was at an all time high in the forties and fifties. Travellers who could afford luxury air travel were to be envied and admired. The world seemed enormous, fragile, newly reborn after the war and flying was a wonder,” says Haynes, an unusualy poetic chronicler for a Kiwi. “Passengers were always treated to fabulous scenery as the maximum cruising height was only 3000 metres and the pilot often dipped well below this restriction to take full advantage of the view below.” 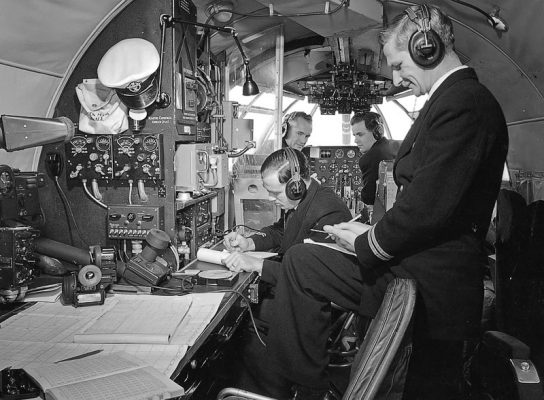 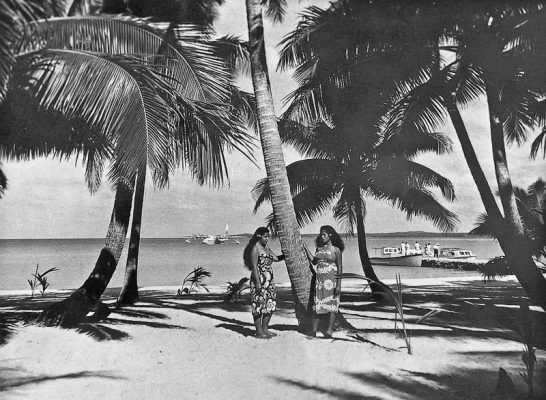 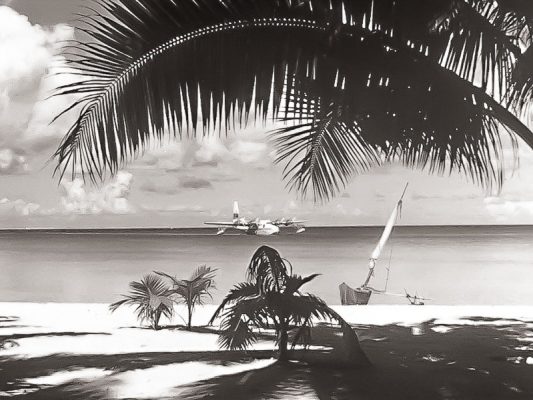 Starting in 1952, TEAL flew the Short Solents on the Coral Route until September 1960. When flying boat services were finally stopped, the coral route was the last of its kind in the world’s new jet age.

Airfare for the TEAL’s coral route was about 30 pounds, six times the average wage. About NZ$3,500 or US$2,500 in today’s money. A few residents flew from the islands to New Zealand. That was even more expensive. “Carrying about 45 passengers, the aircraft with luxurious two deck surroundings were more like high-class restaurants, complete with silver service, tables with linen tablecloths and powder rooms,” says Haynes. “An onboard chef cooked meals to order.”

Coral Route flights were the domain of the wealthy, including rich tourists from the United States and Europe and the occasional movie star, he says. “Flying was seen to be very glamorous back in the 1950’s. To add to the occasion passengers dressed in their finery with women in their hats and furs, men in suits and neckties. On rare occasions, when children accompanied their parents, they wore their Sunday best.”

Haynes and many others have described Aitutaki as being the most romantic spot in the South Pacific. So what makes it so adorable?

Today, most visitors to the Cooks arrive via Rarotonga on the TEAL successor, Air New Zealand. Aitutaki is still superlative, a breathtaking lagoon arrangement of tropical turquoise and topaz, fringed with white breakers and moistened with thousands of green swaying palms. No sharks in the lagoon, but, if you watch closely as you come into land at Aitutaki on Air Rarotonga, you should just catch a glimpse of the little islet of Akaiami, a legendary location of the south seas.

And should your lagoon cruise boat stop for a short break at Akaiami, spare a thought for those adventure seeking flying boat passengers who stepped ashore in this tropical paradise, mid-flight, so many years ago.

This article & content is from The Cook Islands Escape Travel Magazine, for more information and more other interesting articles visit: http://escapemagazine.travel